Home > Run a Business > Going International with Your Small Business

Going International with Your Small Business 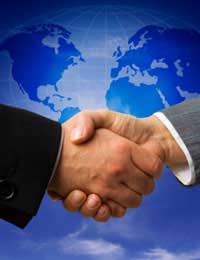 The international stage is not the sole preserve of big business. As it becomes easier to travel to distant countries and to communicate with the people who live there, small businesses are increasingly able to market themselves, their products and their services internationally.

In most cases, your first priority should be to establish your small business in the UK market. Unless your research tells you that your international sales will quickly come to dominate those at home (for example, if your new product is a water purification system that you expect to sell to African countries) then you should probably concentrate your efforts on development and growth in this country first.

But the time may come where you have built a brand in the UK, and you have saturated the domestic market – all your potential customers know about your product, and although they continue to buy, sales have levelled out and local development has nowhere to go. This is a good time to look at expanding your business internationally.

The European Union has a common trade policy that results in a single market spanning the member nations. In general, there is a free movement of capital, citizens and business services within the single market. This freedom, together with the single currency adopted by many member nations (the euro), makes trade within Europe relatively straightforward.

There are, of course, potential obstacles. There are still many different currencies in use throughout Europe, with the exchange rates constantly changing. There are also cultural and language differences to overcome.

Trading With the United States

As the one remaining superpower, and the richest country on earth, the United States represents a tempting market for international trade. With a population in excess of 300 million, the US represents a potential market for your goods and services approximately five times the size of your domestic market in the UK.

A single currency and a common language make trade with the US a tempting proposition. However, unlike the EU, you will need to take into account import duties when conducting business across the Atlantic.

Newly industrialised countries with a good track record and the potential for significant further growth are called emerging markets. Trade with these countries is much more complicated than with the big western economies, but if your products and services are a good fit with the culture, and if you can find local representation, then there is the potential for very rapid growth.

Here are some emerging markets worth considering:

Probably the cheapest and easiest way to establish trade in another country is via the Internet. The first step is to undertake research to determine which country or region you wish to start trading with. You should record this formally, of course, in your business and marketing plans. The Internet can help you with this research.

Having done that, the simplest next step is to set up a marketing website specifically for that country, in their own language. This could be part of your existing site, or a separate website making use of an international domain name.

If you are selling a product, you may find that establishing a relationship with an existing distributor in your target country is a better proposition than attempting to sell direct to international consumers yourself. Their knowledge of the market will be an important asset, and it will be easier to deal with one distributor than with a multitude of separate international customers.

One final point is that there’s no substitute for experience when it comes to international trade. Once you have identified the country you wish to sell into, see if you can find a local small business that is already successfully operating in that market, and discuss it with them. It is cheap to learn from other people’s mistakes. Who knows, there may even be opportunities to save money by cooperating (for example by combining shipments).

The Facts About Small Businesses at Home

Questionnaire: Could You Run Your Own Business?

How to Maximize Your Profit

The Importance of Building Customer Loyalty